The Analogy of the Farting Horse

So I'm working on the book proposal. My friend Susannah recently read a rough draft of the overview. She said, and I'm paraphrasing, "Look, it's a mess, but you're just rusty. It's like you were a horse that was cooped up in his stall all winter, and then he gets let out in the paddock, and he's bucking and farting and bucking and farting, you know?" And after I had finished reeling, and staggering, and after I'd said, "Wow, I've heard rough drafts compared to vomit, and excrement, and saliva, but never a horse fart," she explained, "Hey, it's not a criticism. No one stands there watching that horse thinking he's stupid because he's bucking and farting. He just has to get that out of his system." 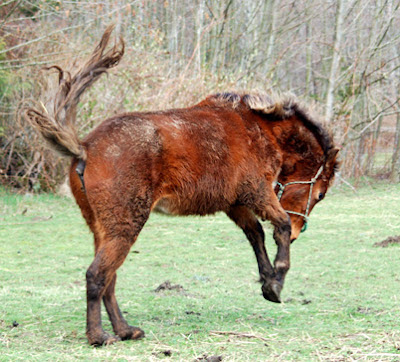 So, I think I'm going to embrace the farting horse analogy, actually. There's something joyful and mad about a farting horse. If you've never experienced it, I can't explain it. I'm not going to say it's sublime or anything, but it makes you smile. And bucking, farting horses are certainly not concerned with how their moves are going over in the press.
Posted by Lydia Netzer at 9:20 AM

Email ThisBlogThis!Share to TwitterShare to FacebookShare to Pinterest
Labels: writing