The Third Son by Julie Wu
The Magicians by Lev Grossman
Don't Ever Grow Old by Daniel Friedman
Lord of the Flies by William Golding
Familiar by J. Robert Lennon
The Hobbit (read-aloud)
A Wrinkle in Time (read-aloud)
A Wind in the Door (read-aloud)
A Swiftly Tilting Planet (read-aloud)
River of Dust by Virginia Pye
Fantay Freaks and Gaming Geeks by Ethan Gilsdorf
The Hive by Gill Hornby
Fuse by Julianna Baggott
The Joy Luck Club by Amy Tan
Hemingway's Girl by Erika Robuck
Let the Water Hold Me Down by Michael Spurgeon
The Wife, The Maid and The Mistress by Ariel Lawhon
Heaven Should Fall by Rebecca Coleman
The Golden Age by John C. Wright
The Phoenix Exultant by John C. Wright
The Golden Transcendence by John C. Wright
Wash by Margaret Wrinkle
The Care and Feeding of Exotic Pets by Diana Wagman
Beautiful Ruins by Jess Walter
Small Blessings by Martha Woodruff
Red Moon by Benjamin Percy
The Last Enchantments by Charles Finch
The Rook by Daniel O'Malley
Swamplandia! by Karen Russell
Room by Emma Donoghue
The In-Between Hour by Barbara Claypole White
Calling Me Home by Julie Kibler
Fightsong by Joshua Mohr
The Art of Floating by Kristin Bair O'Keeffe
Gods of Gotham by Lyndsay Faye
A Marker To Measure Drift by Alexander Maksik
How to Be an American Housewife by Margaret Dilloway
The Ocean at the End of the Lane by Neil Gaiman
Pattern Recognition by William Gibson
Alva and Irva by Edward Carey
The Giant's House by Elizabeth McCracken
Seven For a Secret by Lyndsay Faye
The Animals by Christian Kiefer
Run, Don't Walk by Adele Levine
Shipbreaker by Paolo Bacigalupi
Frankenstein by Mary Shelley
A Separate Peace by John Knowles
Oryx and Crake by Margaret Atwood
Untold Damage by Robert K. Lewis
Heap House by Edward Carey
The Deepest Secret by Carla Buckley
YOU by Austin Grossman
The Year of the Gadfly by Jennifer Miller
The Future for Curious People by Gregory Sherl
Golden State by Michelle Richmond
Ender's Game by Orson Scott Card
Not a Drop to Drink by Mindy McGinnis
Budapest by Jessica Keener
World War Z by Max Brooks
An Explanation for Everything by Lauren Grodstein
Cascade by Maryanne O'Hara
Field Guide for Lost Girls by Amy Franklin Willis
Pride and Prejudice by Jane Austen
Don't Ever Look Back by Daniel Friedman
A Highly Unlikely Scenario by Rachel Cantor

Still In Progress as of December 28:
The Moment of Everything by Shelly King
Where I Am Born by Michele Young-Stone
Melville Biography by Herschel Parker
Stupid Children Lenore Zion
Cinder by Marissa Meyer
The Story of Britain by Rachel Frasier
Posted by Lydia Netzer at 6:01 PM 63 comments:

On Christmas Day, the Richmond Times Dispatch will publish an original short story "Right Before Christmas." This is the illustration they created to go along with the story. If you can be the first to accurately guess the plot of the scene depicted here, I'll send you your choice of prize: a signed copy of the story printed in the newspaper, or a signed paperback of Shine Shine Shine. I'll pick one winner from my Facebook page and one winner here. 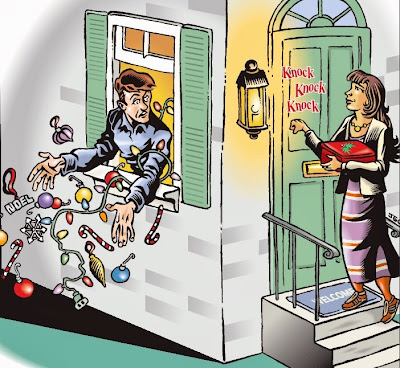