Book and Audiobook Giveaway: A Grown Up Kind of Pretty 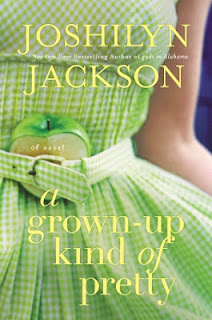 The novel is about three women, told in three voices. Big is 45, a tough nut, smartassed and sarcastic but soft in the center. She's subverted her entire personal life to the care of her daughter, Liza, who is 30 and has had a debilitating stroke. The third character is Liza's daughter, Mosey. She's 15 and a typical teenager: texting, skipping school, and obsessively peeing on pregnancy sticks in the woods to make sure, sure, sure that she's not, like the two previous generations of Slocumb women, pregnant at 15. That's the set-up... now add some baby bones in the backyard -- and you've got a novel on fire with plot, rich with characters, and resonating with meaning.

It's as readable as the best women's fiction, at times funny and at times sad, and I swear to you that you could proudly stand the sections written in stroked-out Liza's point of view up against the best literary fiction produced this year. I mean, it's just fantastic. There is a moment in this book where I had to stop reading and just sit there thinking, oh my god, this is what motherhood is. This is what it means to be a mother.

Also Joshilyn is a good, good, good friend. And a funny blogger. And she's kind of crazy. Which I respect.

So the book has been nominated for a Goodreads Choice Award in the Best Fiction category. Yeah, it's there with Junot Diaz and Barbara Kingsolver and a lot of hard-hitting bestsellers from the year. It's the only work of Southern fiction to make the list -- I think it deserves, so much, to make the finals, I'm telling you. It really does. So I'm hosting a giveaway to support this book.


HOW TO ENTER:
1. If you haven't already read this book, go buy it. It just came out in paperback, and I promise you that you will not be disappointed in this novel. Get it at your local indie -- chances are they might have a signed copy.
2. If you have already read it, and love it as I do, please go to this link and vote for it in the Best Fiction category.

Leave a comment saying you did one of these things, and which prize you want. I will pick four different people to win the four different prizes. Good luck! You can also enter on my Facebook page here.

UPDATE: Joshilyn's book has made the finals!!! Thank you so much for voting. I'm going to keep the giveaway open until after Thanksgiving so we can hopefully push this awesome book even farther!
Posted by Lydia Netzer at 3:39 PM 28 comments: