10 Other Places Besides Amtrak That Should Give Writers Residencies

Inspired by Amtrak's round-trip writers residency on a train, and Sally Kilpatrick's recent adventure to Staples, where she wrote 1000 words while trying out office furniture, I present ten more places that should give residencies to writers:

1. That boxcar from Dexter.


People are turning shipping containers into all kinds of things -- energy-efficient office spaces, homes... sometimes they are even used to ship things. But I'm envisioning a residency experience where you sit in a boxcar, up to your ankles in the blood of your relatives, and the only way to get out is to finish your draft. Looking at the photo above, I'm envisioning a group writing retreat. I'll take the orange one.


Sorry, children, I can't get you that thing you need from the kitchen because I AM IN SPACE. Also, I accidentally left my phone on Earth, and I'm not going to the grocery store for 6 months. Bye.

Come and work in the best organized office/pantry/closet ever. Eat many meatballs. Toss plateware of sparse design at curious shoppers.

Remember that weird abandoned-before-launch amusement park in China? I know I could write a kick-ass book here. But I'll need fog. Lots of fog. I think if writers took this place over, like a pack of feral cats, with laptops and gin, we could probably revolutionize literature. I mean, if I try to write a sentence explaining how this place is a metaphor for...


I have an old, huge, claw-foot tub. This isn't it, because that would be weird. But believe me: it's grand. When my friend Veronica saw it, she said: "That's a suicide tub." I might have already put that in a novel, but that just shows how inspiring this tub is. When I'm stuck on a plot point, I go boil myself in this tub, read 19th century fiction, and the answer comes to me. It would be a great place for a writer's residency, if I weren't such an uncharitable, self-centered person.

6. The Pit Under Jiffy Lube, Where They Do the Oil Changes

Maybe I just want to go down there. I'm pretty convinced it's a whole other world, one I will someday descend into on a greasy rope, laptop under my arm, and write 5000 novels while goblins march by on whispering missions.

Here white, glowing pods descend on you and your laptop from the ceiling, and cannot be lifted until you are writing-satiated. They're meant to be retractable dressing rooms that turn into lanterns, but you can pretend you're inside the brain of an insect from the future, and use the privacy to change short stories instead of pants.


8. The One Stall with a Door in the Women's Prison on Orange is the New Black

The urgency. The laser focus. You are not going to dick around on Twitter when you should be writing, if there's an angry woman outside your door yelling "PINCH OFF THAT SCENE, BITCH."


9. The Waiting Room at Someone Else's Therapist's Office

If you've ever taken someone else to their therapy appointment, you understand the sweet sanctuary of sitting in the waiting room, waiting for them to be done. You know exactly how long you have, you're responsible for absolutely nothing else during that time, and you forgot the wifi password, if there ever was one. There's a pleasant swirl of mild insanity infusing the room, giving you interesting ideas for your book. And there's also that confidence that comes with the satisfying knowledge that today you're not the crazy one, you're the driver. Fully capable of writing solid, reasonable novels that wise, sane people will find full of value and delight.


Ok, screw being the driver. What I wouldn't give to sit down right now at that old typewriter, smoke one of those old cigarettes, and hurl my crumpled up manuscript pages at somebody's skinny wife and satanic kid. And of course the best thing about the Hotel Overlook as a gathering point for writers is not the demonic possession or the underage apparitions. It's the bar! 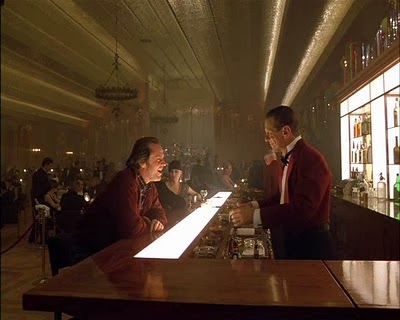