Shine Shine Shine made the NYT Book Review's list of 100 Notable Books of 2012.

Shine Shine Shine is a "People's Pick" in the July 30 issue of People Magazine. "A delightfully unique love story and a resounding paean to individuality." 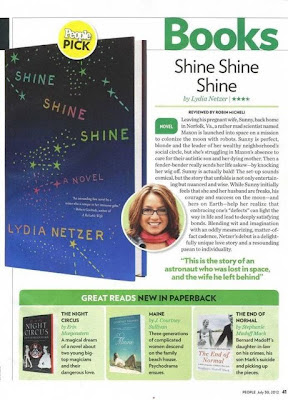 The Boston Globe says: "Luminous" and "Lyrical" and "Lovely."

Shine Shine Shine was reviewed on July 5th by Janet Maslin in the New York Times: 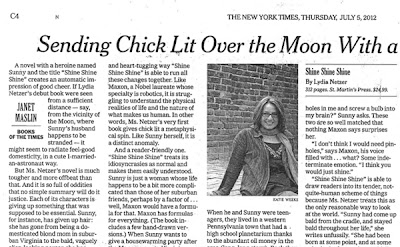 A starred review from Library Journal: "Netzer has beautifully crafted an original story with a cast of characters who make up an unconventional but strangely believable family. After all, it is the oddities that make us all human. Readers will laugh, cry, and, ultimately, cheer for Sunny and her husband as their love story plays out from the past to the future. This story will shine, shine, shine for all adult readers."

The New York Daily News says, "A mesmerizing tale of science, suburbia, and what makes us human."

“Shine Shine Shine is a love story unlike any you’ve ever read, told in lyrical prose that will have you re-reading paragraphs simply to enjoy the author’s voice and her way with words.” —Carla Ketner, Chapters Books & Gifts, Seward, NE

Shine Shine Shine is the Spotlight Book in Amazon's Best Books of July. 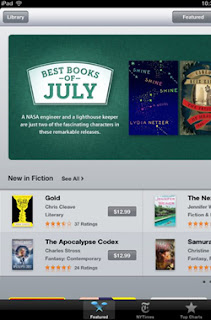 Shine Shine Shine is Apple's #1 pick for "Best Books of July" in the iTunes store. 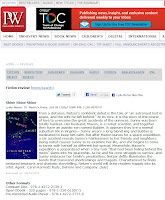 Shine Shine Shine review in Publisher's Weekly: "From a distance, Netzer’s confident debut is the tale of “an astronaut lost in space, and the wife he left behind.” At its core, it is the story of the power of love to overcome the great accidents of the universe. Sunny was born totally hairless. Her husband, Maxon, is a rocket scientist, and together they have an autistic son named Bubber. It appears they live a normal suburban life in Virginia— Sunny wears a long blond wig and Bubber is medicated to keep him calm. But after Maxon leaves for a space expedition, a car accident reveals Sunny’s hairlessness to her friends and neighbors. Being outed causes Sunny to re-examine her life, and she begins to come to terms with herself as different but special. Meanwhile, Maxon’s expedition is jeopardized when a tiny rock “that had been hiding behind the moon” slams into his spaceship. As he and his crew struggle to survive, and Sunny embraces her family’s peculiarities, Netzer deftly illuminates the bonds that transcend shortcomings and tragedy. Characterized by finely textured emotions and dramatic storytelling, Netzer’s world will draw readers happily into its orbit." -- Publisher's Weekly

Sherri Gallentine at Vroman's recommends Shine Shine Shine on NPR in LA as her pick for summer reading.

The Richmond Times-Dispatch raves: "Netzer's munificence of spirit lights her story with compassion."

The Barnes & Noble Review says: "An original story of life's unpredictability and the cosmic power of love."

Book Riot's Bethanne Patrick says, in The Washingtonian: "Netzer’s voice is out of this world—weird yet comforting, fresh yet completely assured, and smart but never condescending."

Lettore Bella says, "Shine, Shine, Shine" aims its light on the secret ante-chambers of the heart where our darkest memories reside next to our most luminous hopes."

Shine Shine Shine is one of "Elizabeth's Best" at Mysterious Galaxy. She says "Shine Shine Shine shows us the many ways love will hold us together, even when our hearts are breaking.  This quirky debut will win you over."

"Shine, Shine, Shine peels away the hearts and flowers of romance to explore the nature of love in its myriad types and shapes." -- Litchat.net

is a very fresh, atypical telling of what is really a universal story of love and families parted and reunited." --Kate Neilan on Adventures with Words

"If you tend to find that literary fiction blends together and that no one is writing anything original anymore- this will restore your faith in contemporary fiction." -- Amanda Nelson on Book Riot

"The characters are unique, the writing is fantastic, and the story is beautiful. I laughed, I cried, I related (I mean, we all have those moments where we just want to FIT IN and then realize maybe it isn’t worth it)." -- Melissa Rochelle on Life: Merging

"The novel combines math, motherhood, Asperger's, and robots into one simmering, delicious stew of a novel.  It's dark, it's romantic, it's irresistible."  -- A Front Porch book on David Abrams' The Quivering Pen