Do you think human behavior can be reduced to math expressions?

In my novel, Shine Shine Shine, I introduced a character who interprets the world in terms of equations and code snippets. This helps him understand why people act the way they do, and allows him to determine how he should behave, in order to fit into different situations. He has equations to determine how fast he should be walking in varying circumstances, matrices to tell him when he should clap or stop clapping, geometry to show how his face should look when people say certain words to him, etc.

Engrossed with this idea of reducing social etiquette to math problems, I began to wonder if human behavior could be explained in even simpler terms. So I have been attempting to develop a set of mathematical inequalities complete enough that one could use it to explain any behavior.

These statements aren’t meant to be truths, and none of these are universally applicable, of course, but here is my hypothesis: These eleven “reasons” can explain any choice made by a human being.

Why keep on doing something that you’ve already done? Why try to get additional iterations of something you already have? Why not stop with one bite of chocolate? Why train and train to go faster or jump higher or lift heavier things? Why set a record? Why hoard dolls? 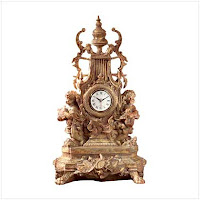 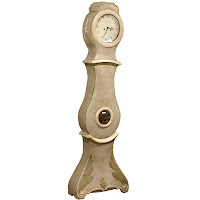 Why does ornamentation exist? Why does a table go beyond being just a table and become a monstrosity of vines and coils and floral motifs and gold leaf? Austerity can be beautiful. And not everyone sees beauty in the same way. But this answers the question... why does the little girl choose the shoes that glitter? Why baroque?

People will endure pain, poverty, and all manner of deprivation for a cause they believe in, to stand up to wrong worldviews and defend what they perceive as right. They give away their money, donate their time and labor, against their self-interest sometimes, to prove that true is preferable to false, no matter the cost.

Looking at this figuratively, one can explain introverted behavior, gift-giving, whistling sea shanties on a long voyage. People seek out behaviors that fill them up, and yearn not to be bored, emptied, drained. They read, instead of sitting quietly for an hour. They stake out some alone time before re-joining a crowd.

Often there is no apparent reason for kind behavior except that kindness in itself is preferred over cruelty. Of course it is not always the case. But this is why you get out of your car and are late to your meeting in order to help a turtle across the road, instead of smashing it with your wheel and moving on.

Production is satisfying. It fulfills a deep human need -- so much that we do it even when we don’t have to do it. People knit, sew, and bake, even though they can get knitted and sewn garments and baked goods more cheaply and easily than they can make them. People continue to work hard even after their basic needs have been met.

Everyone knows the star of the football team gets the girl. Well, the winner of the chess tournament, the best diver, the most skilled guitar player, the best computer programmer... also get the girl (or guy). Success is attractive. Winning draws people to you, even if you’re winning at something obscure and unlikely. This also explains why people try, try, and try again through repeated failures, because success is so desirable, so preferred, people will risk everything to get it.

Interpreting strength as personal this can mean physical or spiritual strength, fortitude, etc. But in a larger sense it can be structural, or collective strength sought by a civilization making collective choices. This also explains why people choose something that lasts over something that dissipates. I considered making this "Function > Malfunction" -- but that's not quite the same thing.

People often make choices and engage in behaviors purely to connect with other people, for the inherent satisfaction and goodness that it provides. Not always. Sometimes isolation gives “fullness” or “success” or “work.” But then Facebook. Twitter. E.M. Forster: “Only connect.”

There are times when humans will endure pain for truth or work or success. But there are also times when we avoid pain just because it hurts, and seek pleasure for its own sake. People give up, stop short, quit. They fail, get lazy, and endure false worldviews. As Daffy Duck once said: “I’m allergic to pain; it hurts me.” 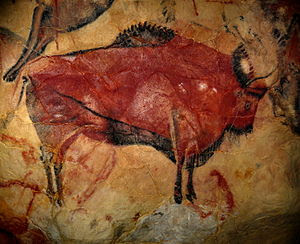 Making art doesn’t feed us, shelter us, or save us from attackers. But it is crucial enough to our humanity that we seem to always do it, no matter what. Music is better than silence, colors are greater than blank canvases, dance is greater than stillness; there’s something in us that needs to erect creative works against the absence, the nothingness that is the only alternative. We have to mark up our caves.

Well, does it work? Does it make sense? Can we use these to explain religion, war, doorknobs manufacturers, diets, blue ribbons, Crayola markers, and grief? Eleven is an arbitrary number, of course. Can it be reduced to fewer terms? Which of the above would you eliminate, and what others would you add? Are there redundancies or omissions?

Email ThisBlogThis!Share to TwitterShare to FacebookShare to Pinterest
Labels: math 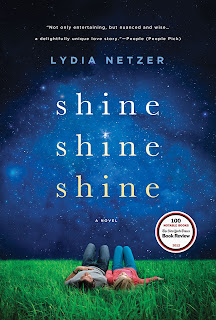 Today the paperback edition of Shine Shine Shine is in stores! This is very exciting because it has special bonus material, a brand new cover, and I corrected the part where I called a river one name when it actually should have been another name. You pretty much need this version. Otherwise you might never recover from the whole river-misnaming fiasco that I perpetrated in the hardcover. 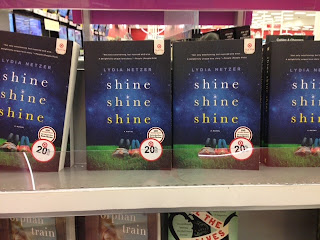 Not only can you find this novel at your favorite independent bookstore and online (and ebook!), but you can also find it at Target in a special signed edition! That's right, because Target chose Shine Shine Shine for their July Book Club Pick, I signed thousands of pages that were bound into thousands of books! Now you can find a signed copy at Target, or order one from Target online.

Here's a picture of the special message I included for Target readers, photographed by my friend Susannah in an actual Target store in actual Chicago: 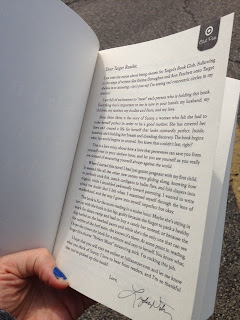 Much as I love being sold in a place that also sells my favorite shampoo and also beach balls, I also urge you to visit your independent bookseller if you have one! Having spent a lot of time traveling this summer and staying in rural places where bookstores are hours away, I feel very lucky to live one mile from a great store: Prince Books in Norfolk.

I would love to see your pictures of you with Shine Shine Shine, visiting Target or any store, or hanging out on your rocket ship, or playing video games with your robot. Would you post them on Facebook and tag me so I can see too? Here's one from a friend in California: 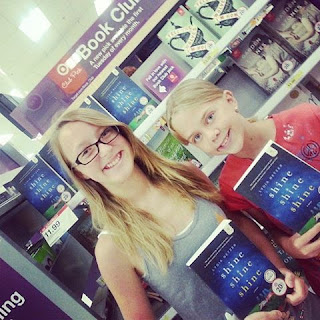