Trickle Down Timeline by Cris Mazza 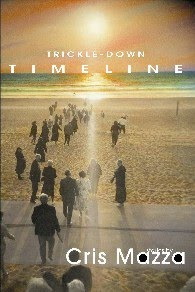 In Trickle Down Timeline, Cris Mazza delivers another smart, abrasive collection of short stories you'll find yourself immersed in as if you were reading a novel. The collection is framed on the scaffolding of the 1980s, one story for each year of the decade. Between and throughout, facts and cultural references are sprinkled like commercials, reminders of other facets of a decade that has been boiled down to neon and gimmicks, excess and Ronald Reagan soundbytes. This is an alternative history, with tidbits like this: "Michael Jackson, who had purchased the entire Beatles music catalogue two years before, attempted to purchase the bones of the Elephant Man." Or this one: "A twelve-day-old baby, born with a cardiac malformation, lived for three weeks with a baboon heart." Anyone who lived through the decade with any level of consciousness will find themselves saying, "Oh, yeah, I remember that." And those who didn't experience it will see another side of a time period most people seem eager to reduce to its cheapest cultural icons. The Rubiks cube. The Delorean. Cheap stuff like that.

The stories are pulsing with Mazza's familiar in-your-face energy, that sort of gritty, at times unattractive realism that refuses to be ignored. This kind of reading is sometimes an intense joy but seldom what you'd call pleasant. It's like watching reality television, in the most grindingly mundane, and profoundly unelevated settings. But the cameras are never revealed, and the characters in all their flawed varieties just reveal themselves mercilessly, into the wide open space of Mazza's literary eye.
Is it voyeurism, that makes reading Cris Mazza so pleasurable? It feels like a guilty secret at times, like a VH1 show writ sublime, where there's beauty in the degradation, transcendence in the small moments of hopelessness, the banal details of everyday life for average characters transformed by the unflinching exactness of the description into something timeless. Until a woman trying to disgust her husband's friend by calling a meatball a bull's testicle becomes a statement on what it means to be female, and a dying dog becomes a symbol of a lifetime goal.

Brilliant, disturbing, disarming, Trickle-Down Timeline is an intimate collection with reverberations across a nation's zeitgeist.
Posted by Lydia Netzer at 2:13 PM 24 comments: