Confession of a Writer Full of Sin 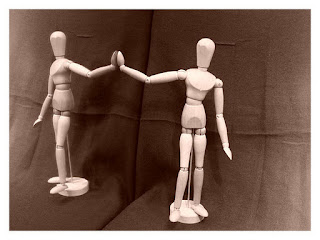 I write because I believe I am a terrible person and I want to explain.

I know I am not all terrible. But I know I am terrible in a significant percentage. I love well but I am also bad. This is true.

I used to assume I was good throughout, because who doesn't think they're good? Even though I knew philosophically the usual things about yin and yang, about mind and body, about id and superego, as a young person I never really applied the concept to myself. When I looked in the mirror, I defaulted to that magical standard of secular humanism: basic goodness of humankind. When I looked at my friends I assumed the same thing. In frowning on the concept of original sin I unconsciously embraced the equally ridiculous concept of original piety. Ridiculous maybe, but true. Everyone says: "I'm a good person."

My badness is a truth of which I have only recently become aware, and I became aware of it through writing fiction.

When I began writing, as a young person with high ideals and a halo around my head, I created stories that were smart and funny, but ultimately, fluff. They contained violence, madness, and grief, but it was a detached and dissembled darkness, a darkness at arm's length. I dabbled and was desultory. I created characters only to serve an abstraction, and plots that had no real connection to my life. A cartoon version of what suffering would look like, a pencil sketch of reality, with absurd backgrounds and farcical props. What does a good person write about, after all? Nothing that bleeds real blood. Nothing that dies actual death.

Then things happened in my life: children happened, with the accompanying pain and devotion. I fell in love for real, with the accompanying fear. My mother died, with desolation. I began to find it impossible to continue to live this life without introspection, this hysterical cartoon life of reckless assumption and convenient farce. My friends and I always used to joke that we were perpetually navel-gazing, always starting sentences with "I feel--." This may have been true, but guess what? The truth doesn't actually live in your navel along with your feelings and your boyfriends and your pets. There's someplace else, someplace that I never gazed, because I'm not one to sit in the bathtub and stare at my knees, or meditate, or ever shut up.
As I began to really grow up, I was becoming aware of an inner awfulness, in spite of myself. It's like realizing that your body isn't just a balloon with air inside, but a construct of meat and organs and fluids. A knowledge you can go on for years without recognizing, but eventually have to accept. And while there was no way I was going to sit around thinking about it, or talking about it, or god forbid understanding it, I did start writing about it, and letting it through in the work. (Parenthetical note: Several years ago, I purposefully engaged in my first real bout of introspection, and the result of it was strangely this: I like chili. I really like it. It's my favorite food. Many times, I considered starting a blog post about this, but thought it was too silly.)

So, my novel is coming out next summer. In this book, I began to present myself in a new way. There is real darkness in it, along with real love. It is funny but sad, loving but cold. It has some death in it, but also some very happy sex, and some falling in love. It has disease and terrible loss, but it also has loving parents and a birth. While the book has a lot of comedy in it, it is the first thing I've ever written that has a serious side too. A book that is revelatory in an honest way, that exposes things about me that are real.

Here's an example: I took my adopted mother off life support in 2004 and she died. Although it was medically logical and recommended by the doctors, I still feel guilty and dark about doing that. In my novel, the main character at one point, standing in a neighborhood party, considers screeching, "I FEEL BAD! I FEEL BAD THAT I PULLED THE PLUG ON MY MOTHER! I KILLED HER AND I FEEL BAD!" She thinks it in all caps. This is true, and this is me.

I worry that I am not a good enough person to be a mother. That's me. I worry that I am a shitty wife. Again, me. I'm not looking in the mirror any more. I'm not looking at anything. Instead, in writing this book I have gone crawling down to a hole that is deep inside me, a black hole surrounded by claw marks and mold. Before, I did not know that it was there. But now, I have laid myself down next to it and plunged my arms into it. In dragging up whatever writhing awful thing came to my hand, and pulling it out, and examining it, I was publicly eviscerated myself. And it really did make things better. I don't feel bad about killing my mother any more. That is actually true. 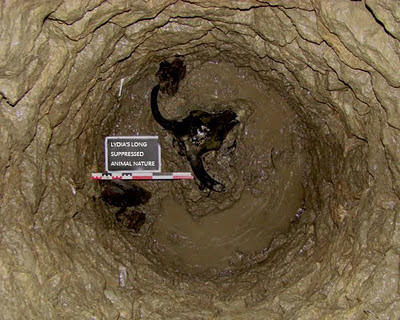 Fictionalizing my inner monster led me to an important fact: this is a fine reason to write fiction. Maybe the only reason. The stuff that matters comes out of that dark, dirty well. And maybe contextualizing that stuff, and explaining it, and putting it into a narrative that makes sense not just to readers but to myself, is a decent purpose. Maybe this is the way I govern my inner animal, now that I can look in the mirror and see it, and recognize that it's there.

So it's funny and dark. It's bright and sad. It bleeds and it laughs. It's me, and this is the only way I can explain it.
Posted by Lydia Netzer at 7:27 AM 41 comments:

My son made this billboard for my book in Minecraft. Don't know what Minecraft is? It's the unholy lovechild of Lego, the Sims, Dungeons and Dragons, and Windows Paint. If your preteen isn't already obsessed with it, just wait. They will be.