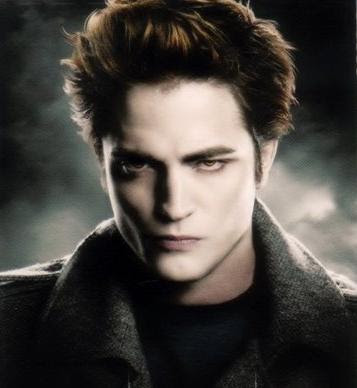 Your girlfriend is mine.

It used to be hard to get a date in high school. Now, thanks to Twilight, it's got to be damn near impossible. What Mr. Darcy did for husbands, Edward Cullen is doing for boyfriends, and another generation of women is losing interest in the happy jocks while musing over the dark-haired, troubled guy with all that anguish in his eyes.

Edward Cullen is the fictional teen vampire / Byronic anti-hero in Twilight that seduces awkward, brainy heroine Bella Swan. The characters in the book bump around school and rainy Washington, being moody and misunderstanding each other, as Bella and Edward fall in love. Then there are mean vampires, and then more love.

So what makes Edward the Vampire Fantasy Boyfriend such a PR problem for real life teens who just want to get a date to take to dinner and hang out with at the prom? What do the girls see in those black gold eyes?

10. The reason Edward rejects you initially is because he loves you *too much*.

9. Edward has super powers like running superfast and walking up trees, which he can perform while carrying you, making you feel very small and thin.

8. He's strong as an ox but physically effeminate and beautiful, looks great in a full face of makeup.

7. He can save you from speeding SUVs and vampires and thugs without sweating. If a real boy saved you from a thug he'd probably rehash the whole event in front of his friends forty times, but Edward just wanders off.

6. When he's being cryptic, and you push him to explain himself, it just makes him like you *even more.* Real boys tend to have to get off the phone when this happens.

5. When he's moody, it's because he wants to eat people, not because he's about to break up with you.

4. He can read everyone else's mind, but yours is a total mystery.

3. At the beach, his skin turns into diamonds. Real boys turn red and blotchy.

2. He's immortal. Real boys can be killed by almost anything.

And the number one reason that Edward Cullen has ruined things for average teenage boys:

1. He is overcome with deep, torturous lust for you, but he can never, never act on it, or you will die.

Edward Cullen is the safe boyfriend. He will never make you actually take your pants off, but he will constantly reassure you that he only wants to ravage you.

What does this mean? Teenage girls don't actually want to be ravaged. They want to be desired but not deflowered, that they want to be constantly, urgently threatened with intercourse, but never have to experience it. Edward will never, ever satisfy himself with Bella, because doing so would kill her. Let me make you a metaphor map: Loss of virginity = death. Edward = impotent. Therefore the perfect teen boyfriend.

So what's a regular guy to do, in the face of this kind of competition? Now that the movie's out, even the illiterate girls have Edward as a measuring stick for male perfection.

Next time, I'll give you ten ways that regular, average boys can compete with Edward Cullen, using sneaky tactics and clever ploys instead of actual vampirism.