How Other People Edited My Novel

I spent over ten years writing my novel. There was a lot of self-editing that happened during those ten years. From tweaking sentences to throwing out chapters and even whole drafts, I edited pretty constantly as I went along. I edited based on my own opinions, and based on suggestions from my critique group. I edited when Susannah told me on an early draft, "No, this isn't right. You haven't got it yet."
But in this post I'm going to talk about the editing that happened between the point that I slammed my hand down beside my laptop and shrieked "DONE" and the point that my editor at St. Martin's said, "Good job, we can move on to line edits." The major, conceptual edits that came from my agent, my editor, and my beta readers.
Lots of people have asked me how much influence my agent and editor had on my book, and if that bothered or upset me. The answer is that they had a lot of influence, and all of it was good in the end, and none of it ultimately bothered me. There were changes that made me hesitate, and some that I thought might be impossible. I had decided that I was not going to be some sort of annoying prima donna. I told myself that I was going to be a good girl and not argue, and that I would take every suggestion and try and make it work in the book. There was only one suggestion that I could not find a way to do. All the rest of them made the book better, I strongly feel. So when I look at the book I don't see my darling book underneath the mean changes and ugly edits forced on me by other people. I see a book that's so much better than it was a year ago, I hardly recognize it.
So what was the last year like, in edits? Here's how it went:
At the end of July, I finished my novel. I sent it to several friends, some of whom are writers. The friends who are writers had some feedback -- some suggestions for pretty deep structural changes. My novel was built in three big chunks, and they felt that the sections should be mixed up more. One friend passed it on to a friend who is an agent. The agent agreed with the structural changes and had some other suggestions too. We did not sign a contract, or get married to each other as author/agent, but I really like her and wanted to try these changes for her, especially since they were agreed on by the other writerish friend types. Thus began revision #1. I blew up the major sections of the book, and started shaking out the pieces.
Revision #1 ended on November 17 when I had made all the changes discussed. I sent the revised book off the the beautiful agent, hoping she would love me and want to marry me in a literary way.
Here is a real, true fact for you: Very little happens in publishing over the winter holidays. Very little happens in any industry.
On January 21, the beautiful agent told me she liked my revisions and on January 25, she sent me a contract and we were literarily entwined. By the first week of February, and the book appeared to be done, only six short months after I had proclaimed it done.
This piece of paper was stuck to my refrigerator during the months of February and March, and it shows the notes I made during phone calls with my agent -- scenes to be written or revised. I would march around my house during the calls, writing notes onto this paper. Some of the notes are in scrawled onto the paper in big scratchy CRAYON. This is proof that I am mentally unstable, or that I have a seven year old daughter and I had a crayon handy. If you click on it, it takes you to a bigger version. 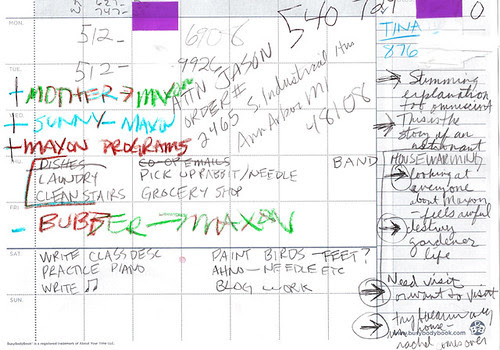 Unfortunately at this point I had a major idea, an idea which sort of demanded that it be not only included in the book but included into almost every part of the book. This tiresome, obnoxious idea of mine endeared itself to the beautiful agent, and increasingly endeared itself to me, although I wrote several emails to various people shouting that it was impossible and ridiculous to even consider doing it. Email evidence shows that I resisted putting it in until March 22. Eventually, with the help of a mathematician (real) and a crowbar (metaphorical), I incorporated this idea. In doing so, I turned up a few more things that needed revisions. An additional scene here, a tweak there, a shift of emotional content over here, and it was done by April 2. Done, done, done, never to be edited again. Completely finished.
Beautiful agent wrote the pitch letter (It's like Eat, Pray, Love, but in SPACE!!!) and compiled a list of editors. On April 26, she started pitching it, and in a couple of weeks we had a deal. And an editor. You may notice that the word "edit" is prominently featured in the title "editor." Unsurprisingly, my adorable editor had a list of things she wanted tweaked and twirled in the book. One character was to have a much larger role. One subplot was to get a much more complete treatment. We talked about the edits on the phone, and I pondered and toiled over them in the manuscript. Here's a screen shot of the notes I took on our phone call. You can see a checklist I added later, when I had boiled down our conversation into discreet tasks. 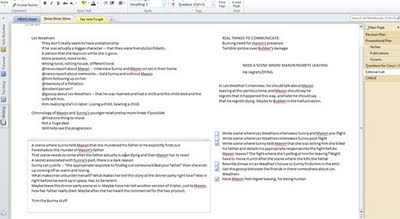 The checklist helped, but it was not until we were sitting around a table at lunch in New York, that is adorable editor, beautiful agent and I were sitting around this table (the tallest people in the room, it is to be believed) that adorable editor came up with a very specific, tangible idea that really lit up the whole problem and got me excited to get into the manuscript and tear it up a bit.
I finished my revisions on July 9. A week or so later, adorable editor wrote back that she liked them. And that's where we are at this moment.
The next step is to get her line edits and start working on those. I'm hoping to get an astronaut to read the manuscript and give me some input on the space scenes. But I have the strong feeling that the book is in its final shape in terms of the scenes and characters, the plots and ideas. Many hands have touched it and changed it. I feel like every suggestion, whether to change something, to add something, or to take something out, was essentially the same message: This isn't working. Writers should never ignore a reader who is telling them "this isn't working." Even if I didn't know how to fix it, or how to implement the change, and even if I felt strongly that it shouldn't be changed, I really tried to address every single issue and respond to every suggestion. From my early readers in my critique group down to my editor at St. Martin's, I valued all the input I got.
No novel falls perfectly from a writer's head. Mine has maybe been through more changes and permutations than most. But when the cover goes on and the pages get numbered and the release date finally comes, there aren't going to be any more chances to fix it. This is my chance to make the book as perfect as possible, and I'm taking every opportunity I get.
Posted by Lydia Netzer at 12:04 AM