Literary magazines, the time has come that we all knew was coming. It’s over. It’s done. The lady in the Viking corset has belted out the final high C sharp. Please exit quietly at the rear door, but leave your plastic 3D glasses in the bins provided. You will no longer be hosting the revolutionary planning sessions. The revolution already happened, and at someone else’s house.

You had a good run. Well, not really, but for the sake of politeness, we’ll say that you did. I have no ill will. I have no desire to wound you in these, your final hours. You once served a purpose, but the purpose is extinct, and so are you. No more glossy coverstock. No more precious author bios. No more black and white photography opposite poems about rain on the window pane and how it’s like roads. No more “This page purposefully left blank.”

I’m with you, and we can go through this together, but let’s face the facts. Literary magazines used to exist for two reasons. The first was immediacy. Rather than waiting for the long, grinding, seasonal cycle of big traditional publishers to get new books on the shelves, readers could find fresher fare in literary magazines, published quarterly, or even monthly. The second reason was for content, as literary magazines reached farther out of the mainstream, farther into the margin, to pull new writers, strange writers, uncommercial writers, into the world of print and out to the world of readers.

Now we have the internet. Do I need to explain, or would it be too painful?

With web sites enjoying daily updates, the old publishing schedule of even an ambitious quarterly magazine now seems yawning and slow. My attention span stretches approximately to the update cycle of The Onion, and then shatters into a thousand pieces. Are you publishing your literary magazine twice a year? Are you kidding?

Then there’s the content and readership. Any brilliant, strange, new, marginalized writer with a Blogger account and a willingness to network can gain far more readers than any literary magazine was able to reach in the history of time. In fact, any jackass with a LiveJournal can reach more of an audience than most literary magazines have ever boasted, even the big ones. I’ve been published in respectable, established literary magazines that I bet fewer than a hundred people actually read. And that is true. Hold me. It is true.

Then there’s the subject of money. The internet is, mostly, free. And well, you know the rest.

So, really, do we need another literary magazine? Just one last really special one? Do we need to hear about how this publication is different, this one is going to be a “really beautiful object,” this one is going to change publishing forever? Do we need to hear from another self-congratulatory editor-in-chief, lovingly stroking his in-jokes, musing fondly on how many subscribers he’ll need to break even, figuring out how to woo in another bored midlist author to showcase in the autumn issue? How about one more magazine named “BRICK” or “PHYLACTIC TUNA”?

Let’s admit it, we were all there at one time. Graduate school can make you feel like that. I freely admit that I, with milk-white hope in my shiny heart, at one time published a collection of short stories written by a friend of mine, and got it placed in local bookstores. I think I was twenty-two. It was fun to play pretend that way. But for the love of Kinko’s, as grim as it may sound, you have to grow up.

What can we do? I would call for a boycott, I guess, but boycotting literary magazines would be like boycotting sandpaper pants. Nobody’s rushing out to the stores to grab them up anyway. The sad fact is that nature will take its course, and these beautiful, exotic creatures will be eaten by literary evolution. But will anyone survive?

The lumbering giants will survive: The Paris Review, Ploughshares, Triquarterly, etc. These are the litmags you have to get in because they put a big gold star on your resume, and they will survive because of their prestige and tradition. People still want to break their heads open on the editorial boards that published Jack Kerouac, Flannery O’Connor, Samuel Beckett. We’ll eventually be using The Paris Review to line the fork drawer, but not yet. 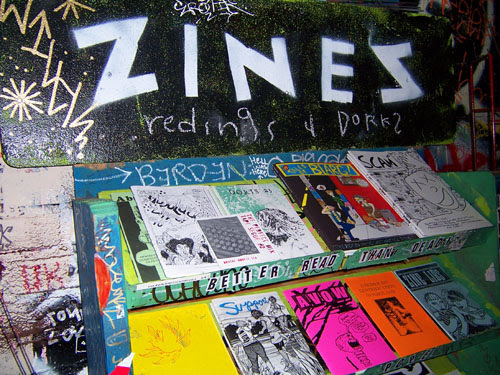 Which brings us to blogs. Remember zines? Blogs are the new zines. People used to staple together mimeographed pieces of crap in their grandmother’s basement and distribute it via copy machine, coffee shop counter, and word of mouth. They were subversive, populist, and updated instantly on the whim of the publisher. Blogs are the zines of the new millennium – now instantaneous, with open access for all. With all of this magic at the other end of a short wire, is it really worth our time to go around trying to sell paper and glue for ten dollars a glob?