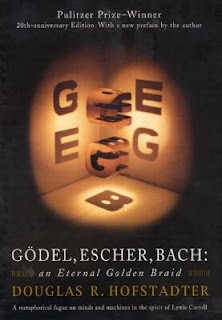 I was challenged to read this book after publicly exclaiming "I think I just made peace with the fact that I can't understand my own actions." Upon researching it a bit, I found it referred to as "the secret nerd bible," and my interest was piqued. This book of philosophy, math, music, and art won the Pulitzer in 1979 and has been inspiring AI programmers with its proposed connections between fugues, recursive figures, and the patterns in the human brain. At least, I think that's what it proposes, because I haven't read it yet.

So I collected 50 or so compliant people in a Facebook group, and laid out a calendar to finish the book in a year, one chapter per two weeks. This first two weeks of January, the assignment is to read the preface.

Things I Liked About the Preface: Hofstadter's self-flagellation over the use of sexist pronouns and the word "mankind" and whatnot. Hofstadter's insistence on not updating the book given recent history and making it a CD-rom or whatever. I like that he said it was a statement of his religion at that moment, and that updating it would be pointless. I also loved the description of the ass pain he had to endure to get galleys made with the images and text exactly the way he wanted -- what an effort!

Things I Did Not Like About the Preface: I don't understand the thing he said about how Bertrand Russell was self-referential while deciding not to be self-referential, thereby creating a conciousness within Principia Mathematica (or whatever). I assume we're going to get more about that in the book itself. I don't understand that, so far, so of course that annoys me.

Here are some interesting things I found helpful to look at:

A video illustrating the logic problem of Achilles and the Tortoise:


Are you reading this book? Have you read it before? Would you like to join our group? I'll be tagging my posts on this subject GEB so  you can find them all if you like, if you're stumbling upon this farther along in the year.
Posted by Lydia Netzer at 11:16 AM