What’s amazing about this book is that Mazza can unfold such a tiny piece of the world into such an interesting shape.

Her characters aren’t talking politics in Madrid, they’re not having epiphanies in the desert, and they’re not redefining cyberspace. They’re small women in a small part of the world, doing an insignificant job, governed by an insignificant boss, serving people who can’t respond. Instead of choosing, for her subject, people who usually find themselves being written about (those who are categorically superlative in some way – hidden or otherwise) she chooses two minimum wage nurse’s aides in a hospital for the severely disabled. Mazza doesn’t glorify these lives –she doesn’t give them secret insights or hidden depths. They remain, outside the book, invisible. They do not articulate their own ideas about their lives or their problems. They do not triumph and they are not destroyed. What's superlative about these women emerges in a small flower for a short time, and then fades. But it emerges in excrutiating clarity.

Part of the fascination of reading _Disability_ is in seeing “behind the scenes” in an unfamiliar setting – in this case the hospital, where the children have names like “Boardboy” and “Scooterboy” and the characters detail their experiences with the work. The administration is predictably idiotic, prescribing hearing therapy for deaf patients, and most of the aides are lazy and neglectful. This book, however, is not about how severely disabled people are treated in state hospitals. The book is about taking two women, really any women, *any women at all*, and finding a story in them, finding “enough” for a novel – proving them “worthy” of having a book written about them. It’s about taking up a hypothetical challenge – I dare you to write a book about *these two souls* and doing it in a way that had me turning pages intensely and reading at stop lights.

It may surprise you that the book is so compelling, given its small and honest scope, its lack of irony or plot twists. This is a story about women, told by a woman as only a woman could truly tell it. I think it’s exactly what we heard about in “A Room of One’s Own” – who cares about what the Prime Minister is doing – we want to hear about the girl behind the counter at the hat store. I think Virgnia Woolf would be very proud.

We by Yevgeny Zamyatin

I didn't know about this book but found it on a friend's bookshelf and was surprised I'd never heard of it. It is a dystopian sci-fi novel, set in the future, but written by a Russian in 1920, before Lenin died, before Stalin rose to power. It was instantly banned by the Soviets, as it is an agonizing criticism of the idea of collective identity. In the book, the people have numbers, and nature has been shut outside the city, and all walls and floors are glass, and everyone lives by a "Table of Hours" which prescribes the activities for the day.

There are plenty of plot-summarizing reviews of the book around. Also, check out the author's portrait, by Boris Kustoviev via Wikipedia. It looks like someone photoshopped his head onto an old drawing. Odd.

The book has as its obvious shelfmates Anthem by Ayn Rand and 1984 by George Orwell, but it is more lyrical, more hysterical, more stream-of-consciousness. I suppose Orwell's prose is stronger and Rand is certainly more direct, but I actually loved its dreamy and confusing style, and didn't mind not knowing what the hell was going on a lot of the time. It seemed more true that a journal entry from this future world, with its strange premises and priorities, would read as confusing and boggling to me. Sometimes I didn't know which end was up, and it almost felt like the narrator was writing blind. I think that was intentional and masterful. One of the best and most convincing aspects of the book was that the narrator didn't always seem in control.

This book begins with the narrator not only a willing part of this world without individuals, but an enthusiastic supporter of these ideas. He isn't grimy and hopeless about it all (ahem, Winston Smith?); he's a cheerleader for the system. Of course, it all goes terribly awry.

It occurred to me as I was comparing those three books that the oppressive, dystopian system never seems to break down for these people because of acquisition of material wealth. It doesn't break down because they don't like being told what pants to wear either. These characters, denied property, denied privacy, denied choice, do not rebel to get their own TV or to get their own bank account or their own window shades. They rebel to get their own girl. It's always love that breaks the system down, that sends the main character tangentially off, destroying himself to be alone with the woman he loves. Interesting. I wonder if that is really true. Maybe it just makes good books, to say that people will give up fortunes but not give up a mate. We'd have a harder time cheering for the grey little cog in the machine, who breaks out of his place so he can triumphantly and emotionally buy a Corvette. Love makes a good novel. But is that really how it would work? The characters in We are allowed to bed whoever they want -- they just have to register and receive a "pink coupon" to make it happen. Would people really bring the world down around their ears just to reinstate monogamy?

The Wavering Knife by Brian Evenson

One of the best things an author can do for you is to leave you with an image that you'll never forget. Short stories do this for me more than novels, I think. From novels, I mostly take away characters, or a general feeling of the novel's place or a memory of its stylistic affect. From poems, when I read them (which I try not to) I am sometimes left with a memorable line or even a word. Short stories, though, deliver a single frame -- like the ranting in the doctor's office waiting room from Flannery O'Connor. The bent translucent form over the candle from Melville. The throbbing floorboards from Poe. Recently I remember remembering the one-armed man in the tree, pruning it with a chainsaw, from Karen Brennan. (Of course there are those memorable moments I'd rather scrape from my brain, like every scene in any movie that helpfully features a person being burned alive. Thanks Hollywood!) 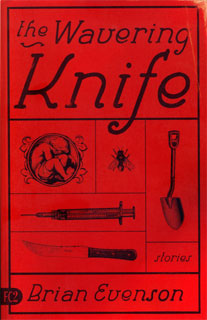 From Brian Evenson's collection, The Wavering Knife, I am left with a residue of images I have never seen before, and that's saying something small, but significant.

Half of these stories are brutal, relentless, and cold. The other half (and I don't mean exactly 50 percent, but *some*) present a lighter, more ridiculous fare. The latter and lighter group are about silly men and the dumb things they do and say -- from the Promisekeeper group that meets in a bar to the guy who tries to set up a church in Walmart, to the pair of redneck gravediggers who have so much trouble getting their corpse into a shallow hole in hard packed dirt that they chop him up, pee on him, eviscerate him, stomp on him, and eventually throw what's left of him into a ravine and pretend to cover up the grave. What happens next? The family and minister come over the hill, with the coffin he was supposed to go in, asking to "dig up" the body. These stories, though smart and wry, are not my cup of irony. The other half of the book, however, is priceless. Evenson's great accomplishment, his genius, lies in these other stories: "The Ex-Father," "The Intricacies of Post-Shooting Etiquette," "The Wavering Knife," "Virtual," "One Over Twelve," "The Progenitor," and my favorite, though it isn't the showiest story in the book, "House Rules." "House Rules" affected me the most, though it is quiet and drab, and the image of the velvet rope across the stairway will stick with me for sure.

Maybe these stories are evolved Kafka, or maybe they're perfect scifi. This is a fiery imagination kept rigidly contained in exacting boxes, let out in discreet units, each one perfect and with a strange serenity. These stories take you in utterly, and then truly reward you, like magic tricks that really work. I can't really give you any plot nuggets or summaries for these, because they don't work except in their own context, provided by the stern, rigorous language and the limitations of the prose. They're so strange and explosive in the ideas that drive them that they need Evenson's specific containers to make them conceivable. Story after story I would finish and then say, "That was so WEIRD. And FABULOUS." Then I'd hungrily go on to the next.

It's not surrealism -- everything is true within its own law. It's maybe alterealism. Whatever it is, it was enormously engaging and challenging to read and halfway through I was already thinking in my head of people I know who would love a book like this. Definitely read it. A small black rendering on a blank tablet, of something truly different, is more intriguing than a dense and colorful mural, six blocks long, of something we already know.

I met Evenson a long time ago at a conference in Denver, and I can't remember much about that conference, including meeting Evenson, except that I know I did and that he had kind of a wild aspect. He looked more like the book jacket photo on The Wavering Knife than he did this photo here, but I'll include this more respectable one since he's now the Director of the Literary Arts program at Brown University.
Posted by Lydia Netzer at 2:23 AM 1 comment: