The Sacred and Profane Love Machine by Iris Murdoch Everyone always says, O Iris Murdoch. Brutal, brilliant, irascible Iris Murdoch. She is so blazingly legendary. I watched the movie, "Iris," as I do slavishly watch all movies Kate Winslet graces, and I realized, I am supposed to love her. But I had never read one of her books, though I always meant to. Recently I picked up two Iris Murdoch books -- this one and The Black Prince, from a friend's book trading shelf. I was, I am sorry to confess, underwhelmed. Now I will say that I read it with great interest and at times felt very can't-put-it-down. But it did not delight me.

This book was brilliant realism. It was about a love triangle and some children were involved. One of the characters, Montague Small, was original in my experience -- I have not met a character like him before. There was a lot of anguish, and a depth of experience that was engrossing. I can't say I enjoyed reading the book. Taking a step back from the oppressive entanglements and all the emotions, I realized that the same characters and landscape, in a P.G. Wodehouse novel, would be hilarious. It is, in a way, bizarrely the same universe. P.G. Wodehouse is brutal, but so deeply cheerful. Murdoch's treatment is so close, so smothering, so dark. I was expecting more of the satire, less of the despair. 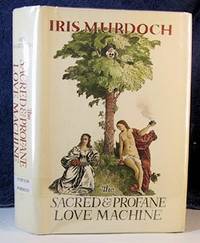 I will move on to The Black Prince -- I've already started it. It's hitting me a little like Humbert McHumbertson, so I dunno if I'm going to get the haw haw haw I'm looking for. Having read such a staggering lot of P.G. Wodehouse, since I was a little kid, and seeing the British upper class skewered in this very la-la pass-the-port way and hasn't everyone got a ridiculous name, it was maybe good for me, or something, to see this grittier and less raucous version of it. I mean, it's probably considered obscene to even compare these two writers, and I'll be met outside by a few stern feminists and beheaded for failing to appreciate Iris Murdoch. I said I would give her another shot. I have the next book in my bag. 'Kay?
Posted by Lydia Netzer at 6:48 PM 1 comment: