I Finished My Novel in Paris

I started my novel in the year 1999. The first idea was to write a novel about a woman who was pregnant for the first time. I was also pregnant for the first time. This level of imagination was about all I could manage as a newly pregnant person. Before pregnancy, I was always a bit of a live wire. While my first two books are questionable in terms of lasting literary value, no one can say they weren't lively. While pregnant, I was reduced to simple declarative sentences. Most of them started with "I" and ended with "am nauseated" or variations on that theme. I wanted to write about a person making the transition from being a person into being a mother. Mostly all I could manage was to talk about puking. I remember that my character at one point climbed to the top of a ladder and then puked. And that was the conflict in the scene.
Then I had the baby and lost all ability to write about anything that didn't end well. Because I so earnestly wanted the baby to be safe and happy, I could only create fiction in a safe and happy world. Which was boring. And disastrous to the plot. Everyone felt fine, did nice things, and tried to blend in. Instead of writing vomit-related conflict, I wrote no conflict. Which may be therapeutic, but does not make a novel. I still wanted to write about motherhood, but had no ability to get beyond the level of "Motherhood is nice."

My second idea for tackling this material was to write about three sisters and a cul de sac. Babe, the oldest, was unmarried, a rover. Ronnie, the middle one, was married with two children. Kate, the youngest, was married and pregnant for the first time. They were mother, wife, girlfriend -- their characters illustrated the transition that I was trying to unpack, from single girl to mother. Ronnie had bought a house on the cul de sac when she was first married, and now Kate had bought the house next to her. There was one house left and they were trying to get Babe to settle down with her boyfriend and move into it. The novel was going to be called, brilliantly, Cul de Sac. I introduced some conflicts. Someone was sleeping with someone else's husband. I wrote quite a lot of this draft.
Then I got pregnant again. On purpose, even. Goodbye, brain.
My third idea, upon emerging from that second stupor, was that the three women would actually be one woman. My next idea was that the woman would be bald. Other ideas stacked with that one -- that she would have an astronaut husband (thanks Susannah), that she would already have one child (with autism), that her mother would be sick and dying. Everything came together from that point. I staggered, stalled, and sprinted, and when we left for France in summer of 2010, I was within a few thousand words of finishing. I had taken some days off of parenting, I had had help with the children, but mostly I had fought it out in spite of my job as a homeschooling mother -- stealing time between lessons, or usually at 1 am, with the children upstairs asleep.
When we reached Paris at the end of our month-long adventure, I was immediately inspired. I sat down and wrote a thousand words the first night. We were, after all, in Paris. I had read the relevant Hemingway. I had read in fact the guidebook that told me exactly where to go to follow the path that Hemingway took when he wheeled Joyce home in a wheelbarrow after a night out drinking. This is what I'd always had in my head -- a trip to Paris, a literary explosion, my hands on fire, my brain turned to molten ideas. My husband, beautifully compliant after a month of climbing Alps on his bicycle and following the Tour de France, agreed to take the children out in the city so I could work. And I did work. I worked with the floor-to-ceiling balcony windows open behind me on an antique table in a mirrored room. I worked with gritty coffee next to me, and then French wine, and then more coffee. I worked fueled by awesome cheese and some sort of internal engine. I worked so much that I was within one scene of the end of the book, and then I stopped. 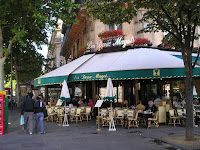 I had an idea. To finish my novel, I would go out into the proper neighborhood. I would walk from our swank apartment in the 8th arrondissement down to Pont Alma, Joyce's favorite bridge. There I would stand where he stood, dictating Finnegan's Wake, and I would think very important, excellent thoughts. Then I would take the Metro over to the Left Bank, and I would walk around down there, scuffing my shoes where Gertrude Stein walked, treading the path that Hemingway trod, and then I would wind up with my netbook at Les Deux Magots, where Fitzgerald and Joyce and the rest of them drank, and I would open the netbook and finish the novel, right there, in the midst of it.
It was a plan that did not happen. I could have done it. I was in the right place at the right time. My husband was going to take the children to a movie. However, when it came down to it, I had a breathtaking realization that this scenario would be all wrong. It would have been antithetical to the book I was writing to shed the trappings of my housewife life and try and inhabit some kind of imagined literary nirvana, deny the person I was in trying to emulate something that had nothing to do with me. I wrote my novel about becoming a mother, and I would write the ending as a mother would. It's the only thing that would work.
I did finish the novel in Paris. But I finished it at that dining room table, wearing my old brown shorts, with my hair twisted this way and that, my husband asleep in a room to the left, my children asleep in a room to the right, the window behind me open on the city -- not the city of Gertrude Stein, but the city I was living in right then. Kids, husband, reasonable sandals and all.
Posted by Lydia Netzer at 1:35 PM

Email ThisBlogThis!Share to TwitterShare to FacebookShare to Pinterest
Labels: my book, personal, writing