2. I'm cutting out of my writing group again tonight.

3. I've started walking to the art museum to think. During the walk, you know, not at the museum. When we get to the museum, we turn around and go home. Map My Ride tells me it's 3.6 miles round trip. This is about as much as I can do with inappropriate shoes, a stroller, a dog, and another child on a bicycle. We've done it twice:

The thinking must be happening between reminding the boy to watch for driveways and reminding the dog to keep up. The girl doesn't need reminded of anything but she does need to be hydrated.

So far I've had two ideas, both unrelated to the novel. Two ideas in seven miles is a number I'm comfortable with. I'm not crowning myself Pope or anything but I'm satisfied.

4. "The Libertine" was like the opposite of "Shakespeare in Love." Like all opposite pairs, they have some things in common: 17th century London, playwrights, female actors, and a bunch of people scrabbling around in the street. Strangely, in the time between Elizabeth and Charles II, London got a lot dirtier and nastier. John Malkovich was the king with a prosthetic nose. It was almost possible to forget he was John Malkovich. I never forgot Johnny Depp was Johnny Depp but the remarkable thing was that during his performance I never even caught a sniff of Jack Sparrow, or Ichabod Crane, or Willy Wonka, or J.M. Barrie. He's a master.

5. "Deja Vu" was pretty dreadful. The movie requires such a radical suspension of disbelief that I needed a special crane and a permit from the city. On the other hand, it was nice to see that not every time travel movie ends with the lesson of time travel: "Travel to the past all you want, but if you try to stop something from happening, you'll end up causing it." Are you listening, Sandra Bullock?

6. "Pan's Labyrinth" and "Snakes on a Plane" both started out with someone getting their head beaten in. From there, the two movies diverged in pretty much every way possible.

8. Chloe Sevigny was in "Zodiac" as a dull, smart girlfriend of Jake Gyllenhaal. I liked her in this role. Between this, that, Big Love, and the other thing, I am ready to forgive her for her slouchy, droopy-lidded performance in "The Last Days of Disco." It's been ten years. I'm over it. 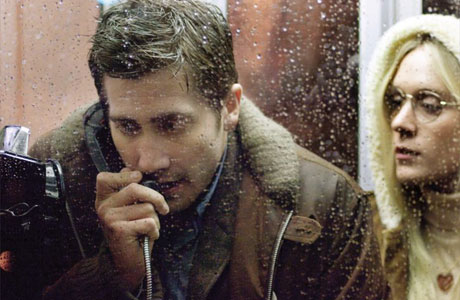 9. We couldn't finish watching "Zodiac" because of all the one month later, six weeks later, three days later, two years later. We never found out what happened. Robert Downey Jr. is so awesome though. He is made of awesome.

10. Speaking of Robert Downey Jr., "Fur" was bad. Susannah says the crime was taking Arbus' asthetic fascination with freaks and sexualizing it. I agree, but felt that the biggest problem was Robert Downey Jr. with all that hair on him.
Posted by Lydia Netzer at 9:12 AM